Posted on December 15, 2015 by glasgowtheatreblog

The UK tour of the Tony, Olivier and Grammy Award-winning Best Musical Jersey Boys comes to Glasgow at the Theatre Royal for the festive season from Tuesday 8 December 2015 – Sunday 3 January 2016.

Ahead of the multi-award-winning musical hitting town, Glasgow Theatre Blog had the opportunity to meet the cast and see a sneak peak of the show this week at Glasgow’s Oran Mor.

Matt Corner will be heading the cast as Frankie Valli* with Sam Ferriday as Bob Gaudio, Lewis Griffiths as Nick Massi and Stephen Webb as Tommy DeVito**.

Seen by over 22 million people worldwide, Jersey Boys is the true story of Frankie Valli and the Four Seasons and their rise to stardom from the wrong side of the tracks. These four boys from New Jersey became one of the most successful bands in pop history, were inducted into the Rock & Roll Hall of Fame and sold 100 million records worldwide, all before they turned 30.  The show is packed with their hits, including Beggin’, Sherry, Walk Like A Man, December 1963 (Oh What a Night), Big Girls Don’t Cry, My Eyes Adored You, Let’s Hang On (To What We’ve Got), Bye Bye Baby, Can’t Take My Eyes Off You, Working My Way Back to You, Fallen Angel, Rag Doll and Who Loves You.

Lewis Griffiths: “It’s real, it’s gritty and it’s credible, it’s a show that appeals to people who wouldn’t normally go to the theatre, especially to musicals”.  Sam Ferriday adds: “The biggest thing, though is that although people might know the music, no one knew the back story of these guys, it’s turned out, that this is one of the reasons why the show has been such a hit, people are shocked by the actual story”. Henry Davis: “You don’t need to be a musical theatre fan to enjoy this show. People tell us that they’ve brought their husband, boyfriend, brother, dad and grandads, people who would normally never set foot in a theatre, to see the show and they’ve left more than pleasantly surprised. We’ve also been told that people have caught the theatre bug from coming to see the show. It appeals to such a wide demographic, it’s not just for one generation, it’s for everyone”. Lewis Griffiths: “Unlike big West End productions which have also toured, or are about to tour, shows like Mamma Mia, Wicked or Billy Elliot, this is a true story. It’s a legacy to these four men”.

Another secret of Jersey Boys’ success is the quality of its cast and it’s notoriously difficult casting process highlighted by producer David Ian: “It’s an unbelievably hard task to cast this show, any actor hoping to play Valli has to be under 5 foot 9 inches, look Italian-American, sing higher than Mickey Mouse and be able to act and dance as well as pulling off a believable New Jersey accent”, added to that, all actors vying for a part have to complete multiple auditions and a final vetting process by the real Frankie Valli and Bob Gaudio before stepping onstage. 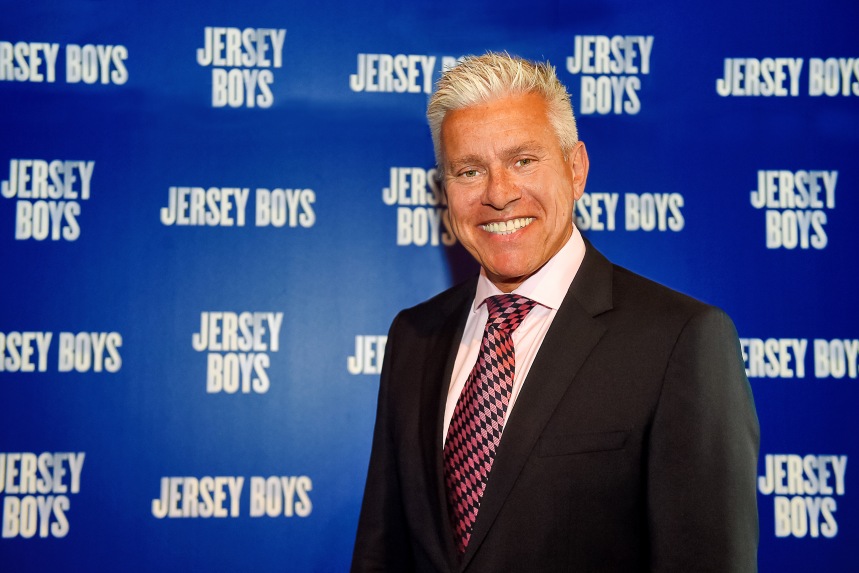 With this is mind, and the shows reputation for quality control, I was interested to find out if each actor is able to bring anything of themselves to the roles of these flesh and blood characters.

Lewis Griffiths explains: “I’m the only one whose character is no longer with us, so for me I really had very little to go on. he was also the quiet man of the group. There are YouTube clips of the others, so there’s something there, but that was the interesting thing for me, I’ve had to develop my own way of playing Nick Massi. I’ve had to drip-feed my own life experience into my portrayal, and after a year of playing him, I now know when there’s either too much Lewis or too much Nick. It’s 50% the character and 50% the actor. Sam Ferriday adds, “yes, there are clips of Tommy DeVito, Franki Valli and Bob Gaudio as they are now, but few of them in their heyday, the era we’re playing them in, so it can be hard”.

Winner of Broadway’s Tony, London’s Olivier and Australia’s Helpmann Awards for Best New Musical, and a winner of 57 major awards worldwide, and with the UK and Ireland tour just passing its first birthday, I asked the actors how they sustained an enthusiasm and freshness for the show.

Sam Ferriday: “We’re fans, fans of the music and fans of this incredibly written play, and it is a play, a play with amazing music. I know I grew up with the music and Henry’s mum and dad were big fans, so he did too, so you never get bored with performing songs that you love”, he also adds “it’s also the closest you can get as an actor to feeling like a rock star every night”.

A true ensemble piece, each actor has their chance to shine. Having seen the show on several occasions the on-stage chemistry is always palpable, I ask if it’s the same off-stage. Lewis Griffiths says: “One of the secrets of its success is the fact that no one story or character dominates, it really is a story of these four guys and there has to be the right balance of personalities between the four of us and luckily there is”.

Touring from the very top to the tail of the UK, the actors have covered a vast geographic area, I wondered if there were differences in audiences’ reaction to the show up and down the country. Lewis Griffiths: “Yes, surprisingly we’ve had different reactions everywhere we go”. Henry Davis: “I’ve been here in Glasgow with Rocky Horror and that was mental so I’m looking forward to seeing the reaction to this”.

In a show filled with highlights, I ask if there are any stand-out moments each night for the actors. Lewis Griffiths: “For me it’s the dirty, gritty, fractious relationship between the four of them, the break-ups, the real life of it, the guts of the show, that’s what I get off on”. Henry Davis: “For me it’s the journey. The chance to tell this person’s story and, of course, there’s the segment where they go into the big three hits, you can feel the audience’s anticipation and when it finally comes, it’s great to see the reaction, but the end where you get to see the character’s reflect back on their story from the present day, it’s a great feeling as an actor to get to play that complete journey”. Sam Ferriday: “I agree about the end, some of the best writing is the end, when each character finishes off their narrative, it sums up the essence of the person and you get to see who that character really is”. Henry Davis: “It resonates with the audience, it’s the point where it really clicks together”. Lewis Griffith, “Despite everything, they all come back together for the finale and it shows it’s not about any one person, it’s all about the music they made together”.

With producer David Ian intimating that Jersey Boys’ world domination seems set to continue with proposed forays into China and Hong Kong, I ask the actors about the future beyond the show and if they have any roles they have their eye on. Lewis Griffiths: “I’ve spent four years chasing this role and I’ve finally got it so I don’t actually want it to end, but I’d like to stretch my wings and do some straight acting roles”. Sam Ferriday: “In terms of musical theatre, Book of Mormon, Elder Price, it’s just a different way of acting, that comic style, otherwise something gritty”. Henry Davis: “I want to do everything, try anything”. From the audience and critical reactions to these four young men and this incredible show, I’m sure this won’t be the last we hear from them.

Jersey Boys will be at Glasgow’s Theatre Royal from Tuesday 8 December 2015 – Sunday 3 January 2016.

*Michael Pickering will play the role of Frankie Valli at certain performances.

**Henry Davis will play the role of Tommy DeVito at certain performances.