Posted on September 26, 2017 by glasgowtheatreblog

Robert Softley Gale is an established figure in the Scottish arts scene, with over sixteen years of experience in diverse and varied roles – including actor and performer, director, writer and advocate of equality within the arts.

Robert’s professional acting debut was in 2002 and since then he has appeared in many productions – including co-writing and performing in ‘Girl X’ for National Theatre of Scotland. His award-winning solo performance – ‘If These Spasms Could Speak’ – was a hit of the 2013 Made in Scotland programme and has subsequently toured internationally to countries including Brazil, Estonia, the USA, Ireland and India.
A graduate of Glasgow University, Robert is an Artistic Director of Birds of Paradise Theatre Company.

For BOP (Birds of Paradise) he has directed the smash-hit sex comedy Wendy Hoose and Purposeless Movements, for which he was nominated for a CATS Best Director award. Glasgow Theatre Blog had the pleasure of talking to Robert about his play Blanche and Butch which is at Eastwood Park Theatre on 7th October.

Tell us a little bit about the play.

Blanche & Butch is set backstage at a touring performance of the iconic 1960s film ‘Whatever Happened to Baby Jane?’. The film starred Bette Davies and Joan Crawford, with Joan playing Blanche, who is a wheelchair user – the three drag queens in Blanche & Butch are presenting the first stage version of Baby Jane to star an ‘actually disabled’ Blanche. There’s a lot of bitchiness and power struggles, camp show tunes and touching ballads – something for everyone!

I play Blanche, the youngest of the three drag queens we meet. Blanche wants to make it big – wants to get his name in lights and be a star. But everyone else keeps reminding him that there are limits to what he can achieve. 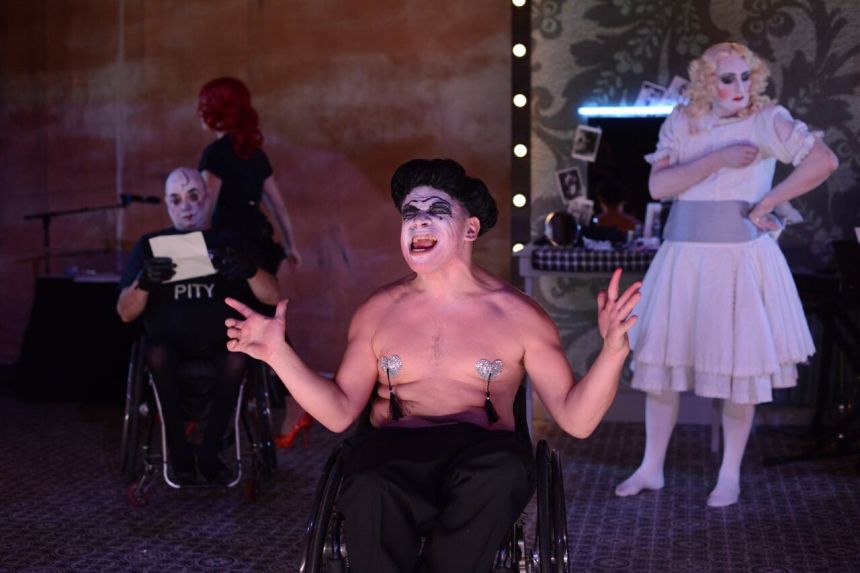 How has the play been received so far, has it been different in different locations?

So far we’ve opened at the Tron in Glasgow and toured to Greenock and Stirling – audiences have been loving the show so far. There are a lot of funny one-liners and much crudeness but there are also songs about trying to be the best dad you can be and a very funny number about intersectionality. Like I said, something for everyone.

I feel like I should write something cruel and bitchy about how difficult they all are the work alongside, but honestly we all get on really well and have a great laugh. The hardest bit to being backstage is putting on tights every night when you’re a guy who has cerebral palsy!

Touring can be demanding, how do you keep your performance fresh/look after yourself when you’re having to travel as well as perform on stage at night?

It is pretty knackering – you learn a lot of tricks over the years to make things easier. Grabbing food whenever you can is important, as it isn’t always easy to find your next meal between shows and travelling. Keeping each performance fresh is about remembering that for every audience tonight is their first night – ever show is a unique event between us and that audience. It sounds cliché but no two shows are the same, we’re always finding new things within the show. 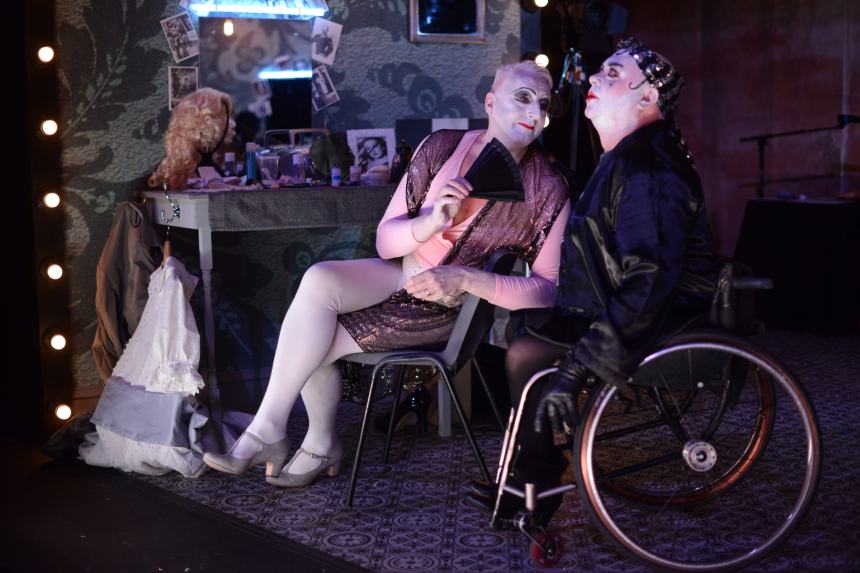 Can we go back a bit and talk about what inspired you to become an actor and the path you took to become one?

You can read quite a bit about this here http://www.softley.co.uk/biography.htm#22 – but the short answer is that I was studying Management at Glasgow Uni – thinking that a disabled guy could never be an actor – when I got a call from a theatre company in Edinburgh asking me to audition for them. I thought I had no chance – but what the heck! Long story short I got the job and 15 years later I’m still here!

Any advice for aspiring performers?

Be nice to work with – you could be the best actor in the world but if you’re difficult to work with then directors will find someone else. And have fun – it’s called a  ‘play’ for a reason.

Finally, why should people come along to see the play? and where else can we see it?

If you want to have a really good night out – with a lot of laughs and moments of “They didn’t just say THAT, did they?”, then this is the show for you.

You can see it at Eastwood Park Theatre in Glasgow on Saturday 7 October and buy tickets from https://www.eastwoodparktheatre.co.uk/article/9098/Blanche–Butch

The rest of the tour dates are available: www.boptheatre.co.uk/blanche-butch/