Posted on August 8, 2015 by glasgowtheatreblog 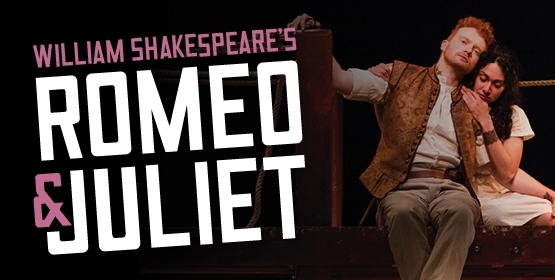 Dominic Dromgoole’s final touring production before finishing his tenure as Artistic Director of Shakespeare’s Globe is a pared-back Elizabethan style booth staging of Shakespeare’s much-loved tragedy Romeo and Juliet. With multiple roles and minimal props the actors deliver a ‘strolling player’ take on the Bard’s blockbuster.

Atmosphere is such a critical element of Globe productions, the feelings evoked in the famous wooden ‘O’ when night falls and the stars twinkle above, is both hard to beat and to replicate. And so it proved in this beautiful, jewel box, mid-Victorian, proscenium arch theatre. The lights remained ‘up’ throughout and unlike its home at the Globe did not dim as evening progressed and while certainly prompting the audience to attention, it also served to highlight the early exits of some theatre-goers during the production.

There are though, many things to applaud here: the production begins with spirit, though it feels like many miles from Verona due to the Balkan-like jig, seeming to signal an energetic purpose the proceedings; scenes are trimmed and play out overlapping one another, ridding it of time-wasting scene changes and also, in the early stages, imbuing the storytelling with drive and the narrative throughout retains its clarity due to the well thought out direction. That said by the end this early drive had all but ran out of steam and been eschewed for quite possibly, the longest draw out death scene one can remember having had to sit through. It is never a good directorial choice to provoke a desire in the audience to leap onstage and fell the fatal blow to speed up proceedings.

The company, whilst hugely competent are somewhat low-key, only Tom Kanji’s Friar Laurence/Benvolio and Sarah Higgins’ Nurse remain writ large in the memory, the pair charismatic and confident presences onstage.The young lovers are played here by close to age-appropriate actors who manage to encapsulate not only the all-consuming fire of young love but its gaucheness and naivety. However the emotions portrayed by Cassie Layton as Juliet don’t seem to come from a place of any depth, it feels more surface than substance, all not helped by her difficulties with projection in this cavernous auditorium: much of her dialogue was consigned to the ether rather than the ears of the audience.

It is such a pity, there’s much that is good here, but an evening at Shakespeare’s Globe is such a magical experience, and one’s hope is that this competent but sometimes lifeless production doesn’t prevent the audience from exploring the riches of Shakespeare further.

This review was originally written for and published by http://www.thepublicreviews.com