You would need to be cynical indeed not to fall for the charms of  The 25th Annual Putnam County Spelling Bee, the Tony Award-winning musical celebration of that peculiar and particularly American institution. Yes it’s tongue in cheek, yes it’s off-beat and up-beat, yes it’s unashamedly sentimental, but beneath its good-natured surface is a biting and very self-aware look at all that American society holds dear and the effect it can have on its young people.

In this inaugural production by Mad Props Theatre, the action cracks on apace under the pin-sharp direction of Sarah-Elizabeth Daly, allowing this new company to deliver an acutely observed and brilliantly executed show. 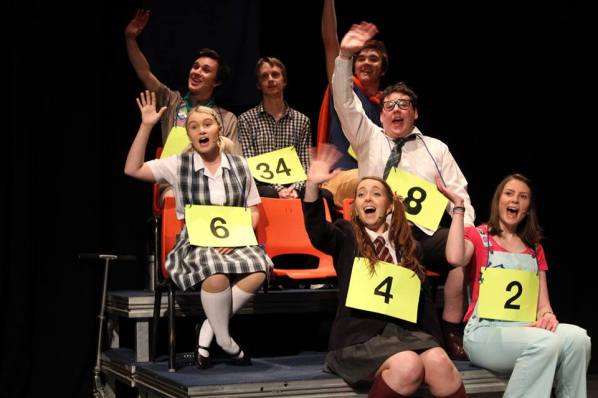 As the six kids face up to the challenge of the big competition and pit themselves against each other and the four rival spellers (culled from members of the audience) the words get more unbelievable, the definitions more hilarious and the six young spellers in the throes of puberty, and each with their own demons to fight, even more hysterical: There’s the (home-made) superhero cape-wearing, home-schooled misfit and self-doubting spelling star Leaf Coneybear, whose cross-eyed trance induced spelling state is perfectly captured by Alex Lyne; Paula Russell is the magnificently monickered Logainne SchwartzandGrubenierre, political activist, speech impaired, neat freak daughter of two over-bearing gay dads; 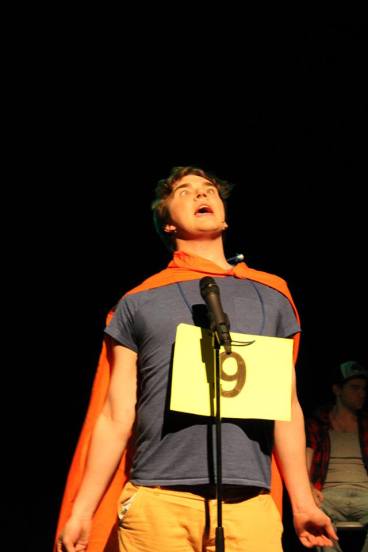 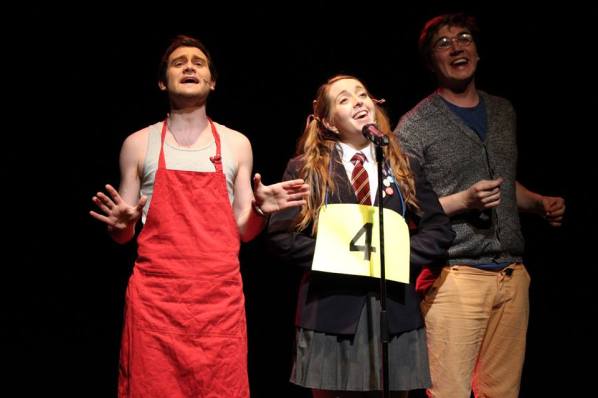 On the face of it Niall Murray (below) who plays Chip Tolentino, boy scout, defending spelling champion, social animal and jock has it easy but Chip’s raging adolescent hormones decide to quite literally rear their ugly head at the most inopportune moment and Murray elicits laughs a plenty in his delivery of the lament ‘My Unfortunate Erection’! 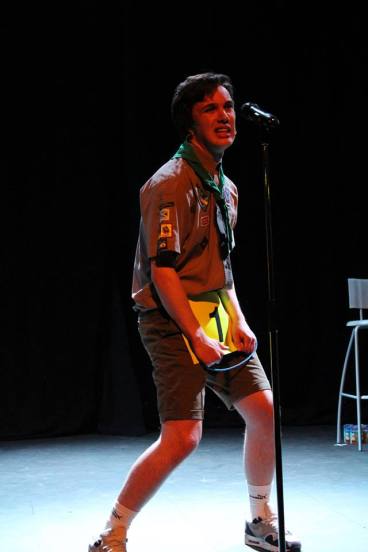 The allergy-ridden, chip on his shoulder, odious mega misfit William Barfée with the magic spelling foot is played convincingly by Ronan Radin (below), a young man who looks disturbingly like Peter Kaye’s love child; Laura McLusky turns in a nicely low key performance as sensitive soul Olive Ostrovsky whose mom is off on an ashram in India, whose dad is perpetually late to see her compete, and whose best friend is her well-worn dictionary, however if there’s any criticism to be made, she could have milked the sympathy angle even more to get the crowd on her side; Rachel Thomson ably charts the disillusion and downfall of Marcy Park – speaker of six languages, member of the hockey team, championship rugby player, player of multiple instruments, hider in bathroom cabinets and poster child for the over-achiever.

If the kids aren’t off the wall enough for you, then their adjudicators:  former spelling bee winner Rona Lisa Peretti, the down-right unhinged Vice Principal Panch and Official Comfort Counselor Mitch Mahoney (a man completing his community service to the state of New York), round out the odd-ball cast. Meghan Crosby has a fine soprano voice and impeccable American accent as Peretti, there’s fabulous characterisation by Ben Galloway as Panch, his dead-pan delivery never failing to raise a laugh and Dominic Spencer as misfit Mitch has the most astonishing range and tone to his crystal clear voice. 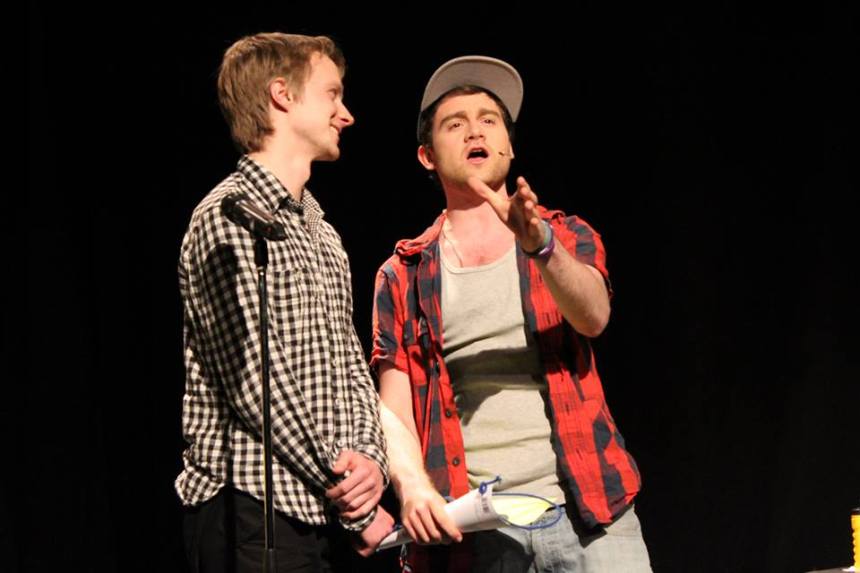 It takes clever direction to get the best from this minimally staged production and on this static set with simple props this story is seamlessly told. Credit must also go to John Gerard McFaulds for his inventive and cleverly varied choreography and Connor Going for his tight musical direction of his note-perfect and fantastic sounding ensemble.

This is the unlikeliest of  musicals on the unlikeliest of subjects with the most unlikely heroes, but the quirky and charming cast of outsiders, ably portrayed with unremitting drive and energy and spot-on characterisation by this tremendously talented cast make this a joyous evening of theatre that’s impossible to resist.

I urge you to get a ticket before it ends its run on Saturday.

Oh, and if all of that doesn’t convince you to go – there’s even an appearance from Jesus!

The show runs from Wednesday 12th June until Saturday 15th June (Saturday matinee 2.30pm)  tickets are £12 and are available by calling the box office on 0141 357 4000 or by visiting cottiers.com/events

Mad Props Theatre is a brand-new theatre initiative with all profits from its shows going to Leukaemia & Lymphoma Research. It was founded by Sarah Daly with the goal of raising money for the charity whilst bringing new theatre to the area. The group has recently been supported by Calendar Girls composer Tim Firth and Fresh Meat star Greg McHugh.