Posted on April 15, 2016 by glasgowtheatreblog

So successful is Chichester Festival Theatre’s 2014 production of Guys and Dolls, that not only has it made the transfer to the West End but has also spawned a comprehensive national tour. Sad to say, however, it appears to have lost some of its five-star sparkle in transit.

The witty words of Jo Swerling and Abe Burrows are regarded as among the funniest in the musical theatre canon and they remain intact in Gordon Greenberg’s revival. However, the pace and direction of Greenberg’s production lacks the spark required to bring Runyon’s stories fully to life, playing like a poorly connected series of stand-alone scenes rather than a flowing whole. 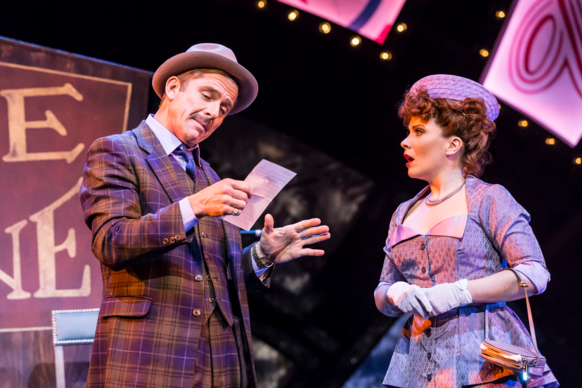 None of the faults of the production can be blamed on the cast, with West End leads Louise Dearman, Anna O’Byrne, and Richard Fleeshman and seasoned actor Maxwell Caulfield at the helm, then quality is assured. Dearman turns in an especially effective turn as a Lucille Ball-like Miss Adelaide, managing to balance the humour and pathos brilliantly and Fleeshman conveys the easy charm and charisma of Masterson with aplomb. The supporting cast too is of the highest quality.

Peter McKintosh’s set design is essentially simple, an arc of lightbulb-ringed adverts and a series of roll-on-roll-off accents, which only really brings the vivid world of New York alive when fully lit. The choreography of Cuban ballet superstar Carlos Acosta and West End stalwart Andrew Wright has been placed firmly centre stage, with extended dance sequences throughout. The duo’s work is especially effective in the ballet-inspired crap game in the sewers with its athletic, inventive sequences and a nod to Acosta’s ballet background in the Swan Lake line up.

With such a top-notch cast and first-rate creative team, it’s hard to see how this could go wrong, but Greenberg’s production falls flat in too many places that if fails to do full justice to the stellar cast and this musical theatre classic. Ultimately unsatisfying.