Posted on June 22, 2014 by glasgowtheatreblog 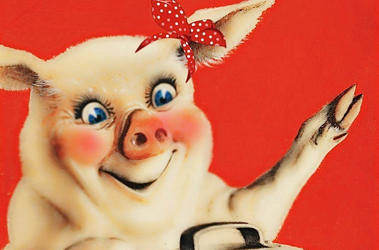 Based upon Alan Bennett’s screenplay for the 1984 film A Private Function, Ron Cowen, Daniel Lipman and composing team Stiles and Drewe’s musical tells the tale of Austerity Britain. It’s 1947 and rationing is still in place two years after the war has ended. Fed up with eating Spam, some less than scrupulous Yorkshire business men decide to secretly raise an unlicensed pig to feast upon at the town’s celebration of the wedding of Princess Elizabeth and Phillip Mountbatten. But into the mix comes mild-mannered chiropodist Gilbert Chilvers, his ambitious wife Joyce and Ministry of Food inspector Wormold and the best laid plans of the town’s great and good don’t quite go to plan.

The cast are, as usual, a knockout, in particular Mari McGinlay as Joyce, in possession of a stand-out voice, a pitch perfect accent and a finely nuanced acting performance, this is a young woman who, to all intents and purposes, is ready and set for the West End right now. As last year, Ryan Hunter turns in a magnetic performance as Dr. Swaby, he is a young man of immense talent and charisma which belie his years. Both can look forward to sparkling careers ahead. The ensemble are universally deserving of praise – maintaining focus and sharpness throughout as well as producing a full and rich sounding chorus.

The set  is simple but effective and high praise must go to the puppet team who successfully bring Betty the pig to life. As someone who saw the 6 figure animatronic version in the West End it was with great interest I awaited Betty’s appearance – I’m happy to say she doesn’t disappoint.

Where the whole endeavour falls down (and indeed the reason for its short West End run) is not the actors or the set or the direction but with the piece itself. Though there are highlights throughout, it is missing that elusive sparkle that makes a show a hit and it ends on a bit of a damp squib. That said, it doesn’t detract from the first-rate performances of the young cast. I look forward to following their future careers.