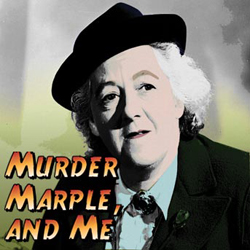 As any Agatha Christie fan knows, the casting of comic actress Margaret Rutherford as Miss Marple in the light-hearted George Pollock MGM series was widely reported by Mrs. Christie to be a grievous mistake. So unhappy was she with the whole situation, and in order to protect the reputation of her precious creation, she made frequent visits to the set to check on proceedings.

This play, set in Rutherford’s dressing room on location of the first film Murder She Said, centres around the ever-present Mrs. Christie and the rather more interesting story of Rutherford’s real life.

In one hour we touch on; mental illness; childhood trauma; murder and suicide, as well as Rutherford’s rather interesting relationships with those close to her.

Janet Prince assumes all the roles in the intimate setting of the Gilded Balloon Teviot’s Wee Room. Wee it is indeed, and the enjoyment of the experience is enhanced by the feeling that we have been personally invited into Rutherford’s dressing room to hear her recount her tales.

Prince retains focus throughout and the sometimes shocking revelations keep the interest levels up in this hour long show. I wouldn’t advise anyone without knowledge of Rutherford or Christie to go along as the main enjoyment is the feeling that you are finding out secrets you never knew about a familiar friend but well worth a viewing if you are a fan.