Posted on May 11, 2012 by glasgowtheatreblog

Originally this had a limited run at the National Theatre at the beginning of 2011. It’s now on a whistle-stop tour before going into The Adelphi in the West End.

Based on Carlo Goldoni’s 1746 comedy The Servant of Two Masters. The plot almost defies description. The safest way to describe it is to say that it’s a farce (not something that is oft seen in theatre these days), and I mean that in the theatrical way!  It has been re-set to 1963 Brighton, and the key point is that Francis Henshall (James Corden), a failed skiffle player, finds himself working for two guvnors. One, Rachel Crabbe (Jemima Rooper), is disguised as her dead gangland twin, and, in her mop-top wig, bears an uncanny resemblance to Ringo Starr!!! 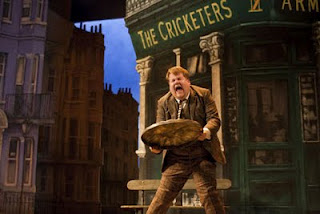 Francis’s other employer is a snooty toff, Stanley Stubbers, who not only killed Rachel’s brother but is also her secret lover. Neither boss is aware the other is in Brighton, as Francis bounces between them like a shuttlecock and, in the play’s most famous scene, serves them dinner simultaneously. 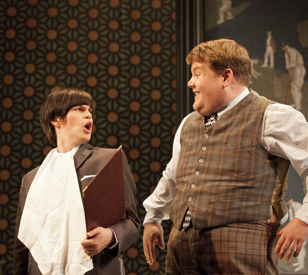 This isn’t exactly a stretch for Corden, being an amalgam of everything you’ve ever seen him in, but you can’t criticise that. He keeps the energy up throughout all of the slapstick and interacts brilliantly with the audience. While Corden is the star, the supporting cast are really strong.

Oliver Chris as Stanley is the epitome of over the top characatured public school arrogance. He has some completely insane lines to deliver which he does brilliantly wringing every bit of humour out of them with a glint in his eye;

Daniel Rigby (whom I last saw in his fantastic BAFTA award winning role as Eric Morecambe in Victoria Wood’s Eric & Ernie) as a would-be actor has fantastic, old-school luvvie theatrical mannerisms. He storms, minces and prances around the stage in turn, delivering his (also outrageously over-the-top lines) with maximum gusto. 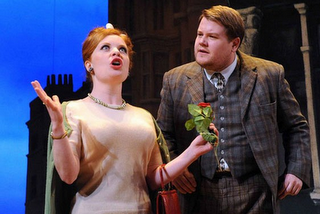 and Jemima Rooper as the male-attired Rachel has a wonderful swagger.  Adding to the joyous atmosphere, there’s even a skiffle group The Craze who play before, during and after the performance.

But what makes the show so enjoyable is its combination of visual and verbal comedy. 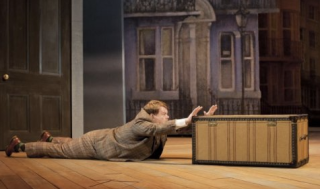 The dinner scene with the octogenarian waiter, magnificently played by Tom Edden, whose hand alarmingly quivers (Mrs. Overall-like) as he serves a tureen of soup, is fabulously funny.

The second half doesn’t quite match the first for hilarity, but as a whole it is laugh-out-loud funny and every single person on the stage is an absolute gem and that’s a rare thing to say, so if you’re in London anytime soon, I urge you to get a ticket.

Postscript – This is going on a national tour at the end of 2012 so you now have the chance to catch it at a theatre near you.