Posted on February 10, 2013 by glasgowtheatreblog

A show that takes as its inspiration T.S. Eliot’s  Old Possum’s Book of Practical Cats wouldn’t at first seem to be the most likely premise for a musical, but 31 years on from its debut at the New London Theatre, Cats, the award-winning and record-breaking musical returns triumphant for this UK tour.

“On just one special night of the year, all Jellicle cats meet at the Jellicle Ball where Old Deuteronomy, their wise and benevolent leader, makes the Jellicle choice and announces which of them will go up to the heaviside layer and be reborn into a whole new Jellicle life.”

Despite its somewhat unusual source material, this is a captivating and engaging story. From the first explosion of twinkling lights and music to the dynamic end, every member of the audience, which included some very tiny members, was utterly mesmerised.

Part of the show’s success is the variety of tone and pace; there is never a point where the interest is allowed to wane. However, the most magical thing about this musical is the sheer skill of the cast. The actors bring the brilliantly observed characters thrillingly alive. Rarely can the word faultless be used for the whole of an ensemble. The complexity of the choreography and the effortlessness with which it is executed is truly to be marvelled at. It is a show of  tiny details – each cast member limiting their movements and gestures to only those which a cat can actually do, (the exquisite hand gestures were, to a man, executed with thumbs firmly attached to their “paws”). After a time the movement is so enthralling that it becomes almost hypnotic. 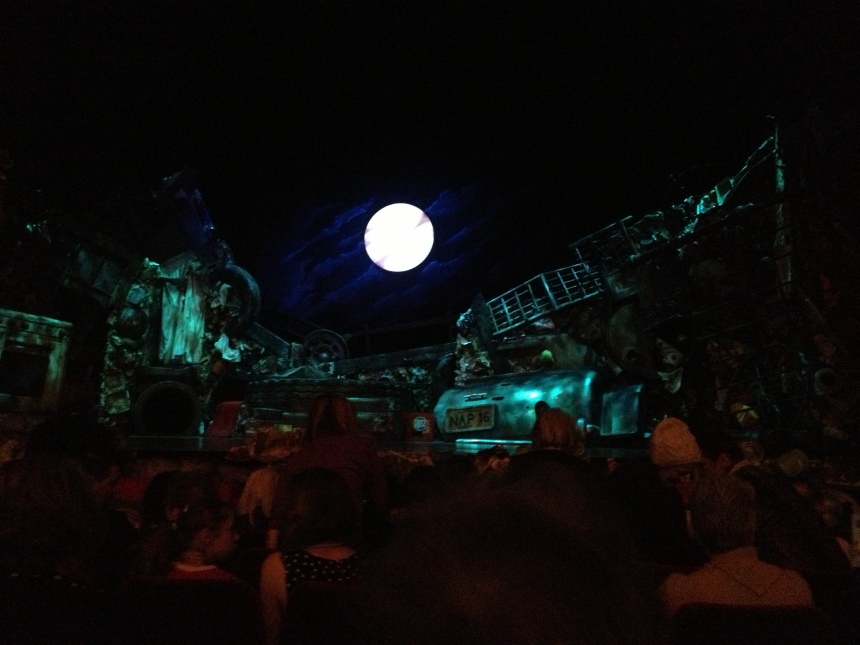 It is difficult to single out any individual performer in a knock-out cast, but particularly captivating were: Ben Palmer as Munkustrap, rarely off-stage for the entirety of the show, the intricacy of his movements and focus and attention to detail were compelling to watch.  Ross Finnie, a cast member from the original production, recreates his character Skimbleshanks with an engaging warmth and charm, and Oliver Savile raises the biggest cheers of the evening with his attention grabbing rebel with a glint in his eye Rum Tum Tugger.

It wouldn’t be a review of cats without mention of Grisabella who sings the most well-known of all the musical’s songs – Memory. Joanna Ampill, international star of Miss Saigon and Les Miserables, beautifully embodies the role of the “Glamour Cat”, shunned by the other Jellicle cats for leaving the tribe to explore the outside world. Weighed down and wearied by her life she desperately tries to return to the fold. Her, at first tentative and heart-breaking rendition of Memory in the first act gives way to a powerful and soaring rendition in the second, leaving the audience with goosebumps and the hairs on the back of their necks on end.

This is a sharply crafted show, beautifully realised and masterfully executed by its phenomenal cast. It is infused with electrifying energy leaving its audience transfixed from start to finish. If this first show audience is anything to go by this will be a sell-out. I urge you to get a ticket if you can – unmissable.

Runs at the Edinburgh Playhouse until Saturday 7th March

Cats was originally directed by Trevor Nunn, with choreography by Gillian Lynne  and set and costume design by John Napier.  Chrissie Cartwright re-creates the direction and choreography for this tour.

CATS opened at the New London Theatre on 11 May 1981 and played almost 9,000 performances. It closed on 11 May 2002 having celebrated 21 record-breaking years and winning an Olivier Award for Best Musical (1981). On Broadway it was the winner of 7 Tony Awards (including Best Musical and Best Director) and ran for an amazing 18 years making it second only to The Phantom of the Opera as Broadway’s longest running musical.