‘I can run fast, but I think I can run even faster. I want an Olympic medal. It’s waiting for me’ 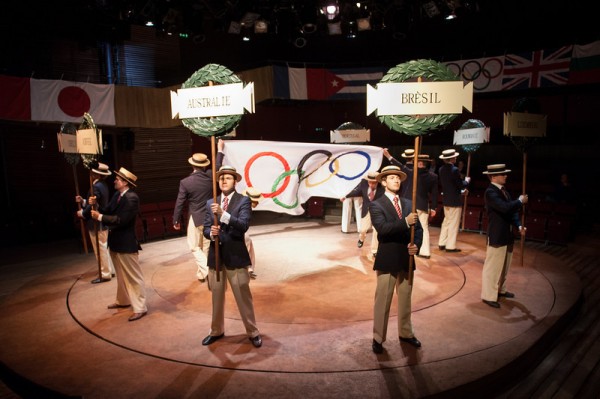 In a week of unusual and entirely new theatrical experiences (the silent disco technology of Biding Time (remix) at The Arches and taking to the water at lifeguard in Govanhill Baths) last night I was lead through the wings with twenty-odd others to take my seat on the stage of the Gielgud Theatre on Shaftesbury Avenue to watch Mike Bartlett’s version of the multi award-winning Chariots of Fire. Seated in bleacher seating to represent the 1924 Paris Olympic stadium, surrounded by a steeply banked running track and with my feet beside the double revolve, the excitement of seeing a play, on a West End stage from the performer’s eye view was making the heart beat that little bit faster. 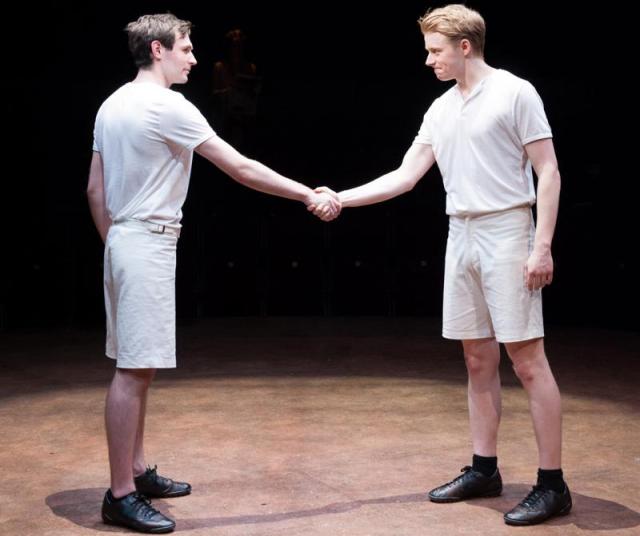 Based upon the true story of Cambridge educated Harold Abrahams, wealthy son of a Lithuanian Jew and Eric Liddell child of a devout Christian missionary family, and the two men’s path to compete at the 1924 Paris Olympics, Chariots of Fire is a genuinely moving and inspiring tale.

The differences between the two men have always been the heart of the story, but the two have many more similarities than differences. Both are driven, Abrahams with the desire to overcome antisemitism and win the approval of his distant father and Liddell by his Christian faith to run for the glory of God. 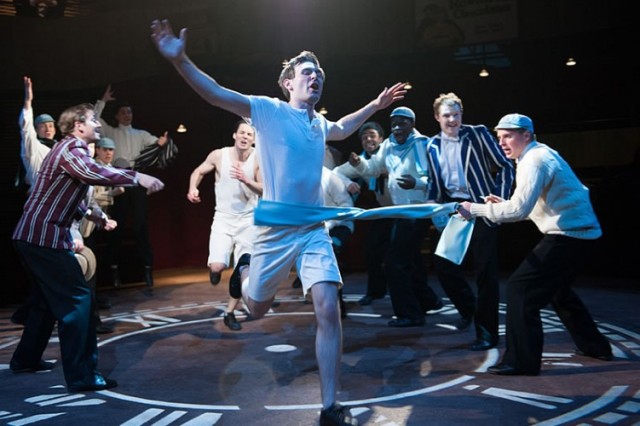 The actors are required to sing and play instruments as well as show athletic prowess and to a man they deliver impressively. James McArdle is particularly impressive as Abrahams, the man’s raw determination to do whatever it takes to win and his arrogance about his chances of achieving glory could easily have made him unsympathetic. McArdle manages to imbue him with a vulnerability that even in the midst of his greatest triumphs, the loneliness and struggle still shows through the cracks.

This is a wonderful celebration of Britishness, there’s Gilbert and Sullivan, Scottish country dancing, bagpipes, marching bands, university life and of course a rendition of Jerusalem.

Tam Williams who appears alongside father Simon, delivers a fine turn as archetypal English gent Andrew, Lord Lindsey who re-creates the famous champagne glasses on hurdles scene (below) not once but three times. He also typifies the classic British turn up and get on with it spirit when he arrives, jacket casually slung over shoulder, cigarette dangling from the corner of his mouth to compete.

This is a truly remarkable feat – bringing to life the beloved multi-Oscar winning film and managing to take the audience on a powerful emotional journey, and it is down to a truly gifted creative team. Writer Bartlett’s ability to get straight the emotional heart of a piece is stunning (his Medea at Glasgow Citizens two weeks ago was as pin sharp and straight to the point as this), the dialogue is sparse and it relies on a series of short emotive, quick moving scenes to drive the narrative. Miriam Buether’s double revolve set, Scott Ambler’s inventive choreography and Vangelis’ iconic score heighten the excitement and truly carry the audience along with the actors in this fully immersive theatrical experience.

This is stirring and spine-tingling – the sound of the actors as they pound the track around you, the whiff of embrocation and the blast of wind as they streak by is utterly visceral. I can’t recommend this highly enough – it will put joy in your heart and bring a tear to your eye. See it if you can.

If there’s a God, which at the moment I DOUBT, I want you to curse him. If there’s any Justice, I want them – both of them – in a car crash.
Her husband’s gone and her future isn’t bright. Imprisoned in her marital home, Medea can’t work, can’t sleep, and increasingly can’t cope. While her child plays, she plots her revenge.

Receiving its world premiere at the Citizens, this emotive and affecting new version of Euripides’ Medea is a piece of theatre that speaks powerfully to its audience. Mike Bartlett is a writer of rare form and his arresting approach to storytelling packs an emotional punch. The dialogue is razor-sharp and the pacing perfect.

Rachael Stirling is exceptional and her electrifying portrayal of Medea is the highlight of the evening. This is a hugely accomplished piece of theatre impressively executed. The combination of Bartlett, Stirling and The Citizens makes for an unmissable night at the  theatre.