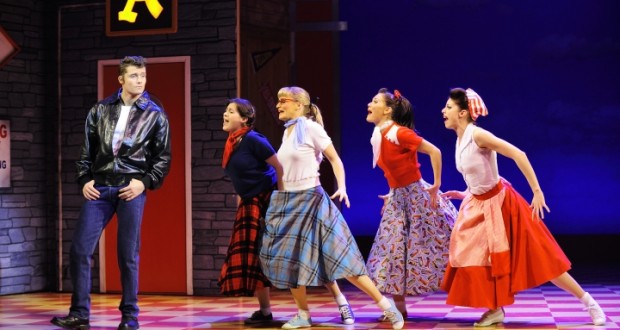 Previously published at The Public Reviews at: http://www.thepublicreviews.com/happy-days-a-new-musical-kings-theatre-glasgow/

TV’s favourite 1950′s family, the Cunninghams and the rest of the gang from the beloved show Happy Days: Pinky, Potsie, Ralph Malph, Joanie and Chachi join forces in a battle to save their beloved diner Arnold’s from demolition. It’s a race against time. Can the town rely on their favourite hero ‘The Fonz’ to save the day?

Happy Days: A New Musical is written by Garry Marshall, creator of the original 70’s and 80’s television series, and despite this pedigree the storyline of this new musical is slender at best and incoherent at worst: a picnic with a wrestling match?! in which the Fonz will challenge his old enemies the Malachi brothers. In a word association game, wrestling wouldn’t be the word that sprung to mind when saying picnic (though this reviewer feels it may from now on) there’s a tap dance routine with fruit pies, Luchador costumes and an appearance from James Dean and Elvis – following this? No, me either. That said it’s all done is such a positive and jolly fashion that if you sit back and let the madness wash over you then it’s all perfectly pleasant.

One of the fundamental issues with the show is that it is short on dialogue and heavy on song to carry the story along, unfortunately a lot of the lyrics are lost in mangled diction and poor projection and the songs by Paul Williams, though reminiscent of the 1950’s don’t have that fifties spark, any real immediacy or catchy hooks to get you involved. That said there are a few gems: “Oooooh Bop” delivered by Fonzi and the Dial-Tones, “Run” from the male cast members and “Legend in Leather” from Pinky. To its credit Tom Rogers’ unfolding set design is vibrant and evocative and the set changes slick and well-executed and as expected from Andrew Wright, the choreography original and inventive and faultlessly executed by the ensemble (though, rather reminiscent of Jersey Boys at times). The basketball themed “Run”, the act two opener, in particular, is a real delight.

The young ensemble, many in their first professional engagement are excellent and thoroughly deserving of praise. Enthusiastic, slick and effective, their commitment transmits warmly to the audience culminating in a mass bop along at the finale. Heidi Range equips herself well and delivers an engaging performance as Pinky, veterans Cheryl Baker and James Paterson as Mr. and Mrs. Cunningham are also excellent, Baker even manages a cheeky nod to her Bucks Fizz days with a rip your skirt off moment. Paterson too provides some welcome comic moments in his scenes as the Grand Poobah of the Leopard Lodge. Deserving of mention is Andrew Waldron as Ralph Malph, a young actor with fine comic timing and a bright future ahead.

The main issue with the whole endeavour is the critical casting of Fonzi: Ben Freeman is utterly lacking in charisma, thoroughly unconvincing, he appears emotionally removed from the role he’s meant to be playing. His accent manages to travel through all 50 of the United States through the evening and his nasal singing voice grates. Despite its faults Happy Days is a pleasant enough way to spend a miserable winter’s evening and one can’t help willing the whole thing to succeed: the ensemble invest so much commitment and energy to it that you want to love it, ultimately it’s the material that lets the whole thing down. Still it didn’t stop the Glasgow audience from dancing along and singing the famous theme tune at the top of their lungs at the end. 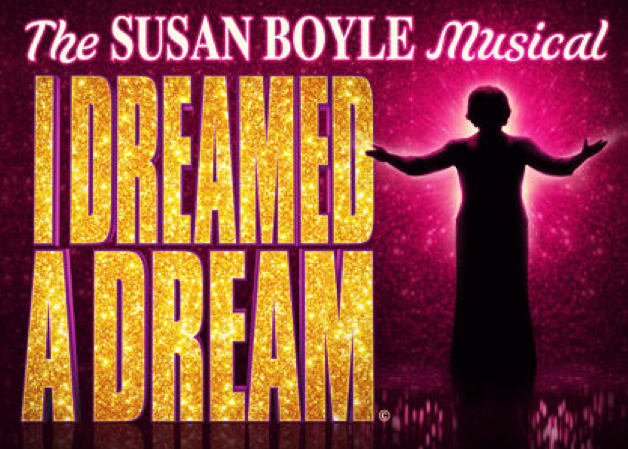 Elaine C. Smith’s starring role as the “inner voice” of Susan Boyle packs an emotional punch in this, her musical I Dreamed A Dream.

It certainly can’t be said that this is an uplifting tale of one of the “little people” and her glorious rise to stardom – be prepared to leave the theatre having seen an often depressing and heart-breaking story powerfully told. From oxygen depravation at birth, severe school bullying, over-protective parents demolishing her chance at love, to heartbreaking loss and her horrific treatment by the tabloids, it leaves no stone unturned in its telling. And it is all the better for it.

In returning home to Scotland, where this show’s language and cultural references have the most resonance, where the audience can draw direct parallels with their own up-bringings, it held the sold-out audience firmly in its grip from start to finish. There were moments when the audience, so in its thrall, were so silent you could hear a pin drop.

It would have been easy to tread lightly, to gloss over the rough patches but this is a braver story to tell and one which will leave a lasting impression on the audience of how the real story behind the show-biz sparkle isn’t as fairy tale like as we want or imagine it to be. And I hope it’s rapturous reception gives Susan Boyle some comfort from the life-time of heartache she has endured in its creation.