Posted on April 30, 2016 by glasgowtheatreblog

Judy Garland is in London with her soon-to-be fifth husband Mickey Deans, ostensibly to complete a six-week residency at the Talk of the Town, but in reality to pay off her substantial debts and hopefully kick-start her career. 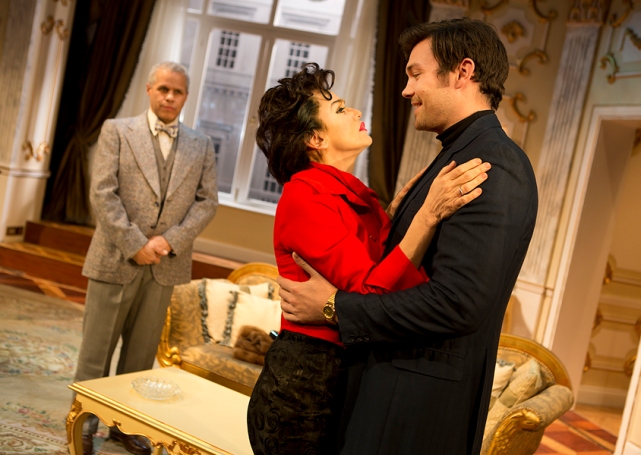 Forty-seven years on from her demise, Garland’s name still has the power to draw in the crowds. Peter Quilter’s intense four-hander, End of the Rainbow charts the last few months of the superstar’s life, a life that started on stage at the age of two and was cut short at the age of 47, by pill-popping and psychological abuse from the studios that made her a star and the men who supposedly loved her.

Taking us from her suite at the Ritz to the stage of the Talk of the Town, Quilter’s insightful, hysterically funny and inevitably tragic script, mirrors Garland’s roller-coaster life, portraying the emotional ups and downs of a woman who was never allowed to grow up in the eyes of both the public and her studio bosses. A woman to whomever she met thought, “they’re either gonna piss on me or kiss my ass” and despite a life of adulation and acclaim, always thought of herself as the unworthy ugly duckling. 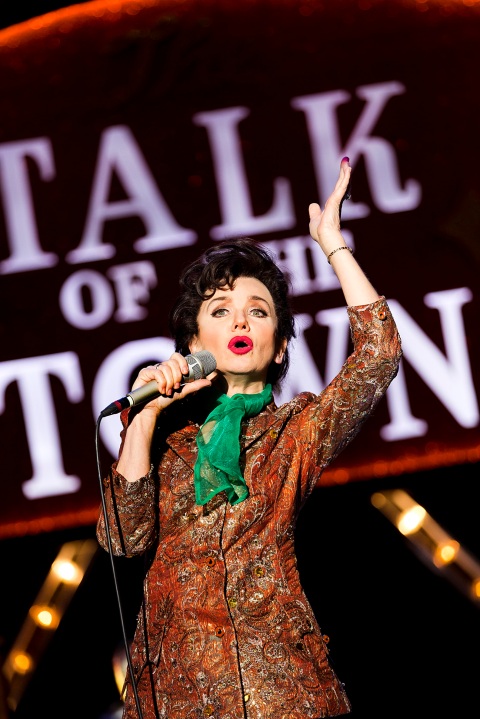 As the mercurial Garland “I’m so buzzed they could shove cables in me and I could power Manhattan”, Lisa Maxwell carries the weight of the show on her shoulders. Embodying both the strength and vulnerability of the icon, she flits between frail bird and potty-mouthed tornado with ease. Maxwell is jaw-droppingly impressive throughout, throwing out acerbic barbs one moment and portraying gut-wrenching despair the next. She captures Garland’s idiosyncratic gestures and the rasping edge of her voice in her later years, with astonishing precision.

Sam Attwater turns in a solid performance as Deans, and while Quilter portrays him as an opportunist, we must never forget the force of Garland’s will. Did Deans really have any chance of saving her? This was a woman used to getting her own way at any cost, a woman who stuffed Benzedrine down her panties to avoid getting caught, washed handfuls of Ritalin down with slugs of whisky and threw tantrums throughout her adult life to get what she wanted.

Gary Wilmot, as musical accompanist Anthony Chapman is a sea of calm in the ocean of madness that surrounds Garland, his touching love and offer of escape tenderly played out.

As much as Garland has been portrayed as a victim, and undoubtedly she was, her path to destruction was paved from birth; at first an unwanted baby, then an indulged child, to global superstar, she never truly grew up nor accepted anyone’s way but her own. As tragic as her final years were, ultimately she was the architect of her own demise.

Quilter’s beautifully written script and the stunning performances of its cast make this a truly unmissable show.