REVIEW: The Incredible Adventures of See Thru Sam

Posted on September 29, 2013 by glasgowtheatreblog 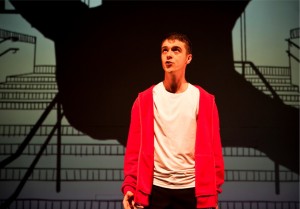 Fifteen year old Sam McTannan has a superpower, the ability to make himself invisible: invisible to the cool kids at school, invisible to his teachers and invisible to the girl of his dreams. It’s a superpower he’s really rather happy with, ensuring as it does a pretty quiet life. But one tragic day all that changes when Sam’s beloved parents Chip the Grip and Sheila the Feeler, are killed in a car crash. Sam’s superpowers desert him, placing him firmly centre stage, where he has to deflect the attention of well-meaning teachers, his nemesis Uncle Herbie and the horrific school bully Chunk, boyfriend of his teenage crush Violet.

The Incredible Adventures of See Thru Sam, this heart-breaking, thought-provoking and ultimately life-affirming play comes to us from the assured pen of Johnny McKnight and manages the difficult feat of being genuinely laugh out loud funny and deeply moving in equal measure. It has emotional pull from the very first scene, grabbing you and tugging at your heart strings, pulling you this way and that, throughout the whole 80 minute roller-coaster ride.

To his great credit McKnight never shies away from confronting difficult themes and his fine ear for comic dialogue and finger on the heartbeat of the shunned in society strikes a chord, not only with the high school students in the audience, but all of those who have survived their teenage years.

The actors are universally deserving of praise, Julie Brown and James Mackenzie take on multiple and diverse roles with ease, and manage the lightning quick changes with a slickness that defies belief. Particularly successful are Brown’s perfectly judged portrayal of Mrs. Timmins, the eccentric but well-meaning Home Economics teacher and Mackenzie’s hysterical turn as Sam’s best buddy Walrus. As Sam, James Young carries the weight of the dialogue on his shoulders and manages to switch between direct audience address and dramatic interaction with admirable skill. He is utterly and heartbreakingly convincing as the ill at ease teen negotiating his way through the minefield of growing up, grief and love.

The set design by Lisa Sangster deserves special mention. Through the stunning use of Jamie Macdonald’s ingenious animations and Kim Beveridge’s video design we are not only fully immersed in Sam’s world but also party to his innermost thoughts.

Innovative, emotive and unmissable, I defy you to leave the theatre without a lump in your throat. See it if you can.

Reviewed on 24 September then touring Scotland.