REVIEW: Edinburgh Fringe – As You Like It, C Venue C

Posted on August 12, 2012 by glasgowtheatreblog 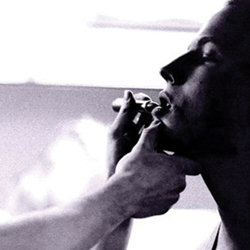 This might not be Shakespeare as you know it, but you’re definitely going to like it. The tale of Rosalind and her love Orlando and their gender-swapping love games are played out in a wholly original way by Cambridge University Amateur Dramatic Club.

Rosalind and Celia are in Paris, the inhabitants of a corrupt modern-day court, and their only concerns are where to charge their iPods and plug in their hair straighteners. So begins this all-male, time travelling production of Shakespeare’s As You Like It. As they wander deeper into the countryside the pair fall further into the past and find themselves in corsets instead of Louis Vuitton. Our hero Orlando is also in dismay, he can’t get a signal on his Blackberry – so he has to try his hand at tree-carving instead.

This modern take on one of The Bard’s most joyful plays is still pleasingly faithful to the original but the most appealing thing about this production is its return to the bawdy spirit of its Elizabethan origins. There’s something to marvel at every minute: linguistic gymnastics, amazing physicality, falling wigs, Renaissance garb, time travel and a lot of laughs.

However its ebullience is its downfall in many ways, the dialogue is often mangled in an attempt to be exuberant, and there’s the feeling that some of the players are wringing every ounce of drama out of their parts. That said, there is some fine acting too, in particular Tom Russel as Rosalind whose subtly nuanced performance was the highlight of the piece.

Cambridge University Amateur Dramatic Group achieve what many fail to – and that’s bring originality to Shakespeare, and that in itself is well worth paying the admission price to see.