War Horse is based on the novel by the former children’s laureate Michael  Morpurgo.

It tells the story of the First World War through the eyes of a horse, Joey, who is sold to the cavalry division, shipped off to France, serves first on the British and then, after being captured, on the German sides before ending up wounded and wandering in no-man’s land.

But Joey is pursued by his young master, Albert, who enlists at the age of 16 with the express purpose of finding his beloved horse amid the carnage of the trenches.

Quite frankly of all the possible children’s novels to stage – this one, due to its scope and storytelling, looked the least likely. How on earth do you put a life-size horse on stage, and make it the most important character in the show, believable?

Well you do it by making Joey and the other horses in the show truly magnificent creations by the Handspring Puppet Company. Their wooden framework, translucent fabric skins, and extraordinary mobility somehow capture the very essence of the horse.

This is much more than just a puppet show. Nick Stafford’s powerful adaptation of Morpurgo’s novel, ditches the horse’s narrative and   tells the story through the human characters. It brilliantly captures the intense relationship that can exist between humans and animals and the waste and terror of the First World War.The sight of horses and sword-wielding soldiers charging across no-man’s land into great blasts of machine gun fire   encapsulates the futility of the conflict.

And though it might seem sentimental to conjure the suffering of war through   the agonies of poor animals, it somehow doesn’t feel like that. There is something so noble about these astonishingly lifelike puppets, whose movements are so meticulously caught by their operatives. 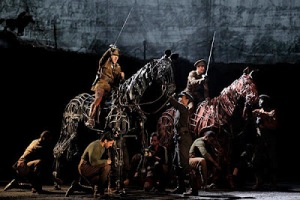 The play is engaging and emotional from start to  finish and is beautifully performed by the entire cast. The narrative is film like and it is no wonder that it made its way onto the big screen. The  moving music, sung by folk singer Bob Fox, gives the play a cinematic feel as well as evoking the time and place beautifully. It also builds an atmosphere and stirs emotions in a way that should be envied by many musicals. The sound design also adds to  the realism. My only bugbear was that some of the dialogue was not amplified enough and got lost in the circular auditorium of The New London Theatre (I was in the stalls so I don’t know how it was from further up).

All things said, this stands out as a fantastically imaginative play and a real theatrical event. I can’t recommend it highly enough.