Posted on January 12, 2018 by glasgowtheatreblog

From the creative team behind the hugely popular Hairy Maclary Show, Little Red Riding Hood is a fun, original musical for children, with live music and loveable characters.

The show has toured from Edinburgh to Hong Kong and Singapore and comes to Eastwood Park Theatre as part of its 45th anniversary programme.

Recommended for pre-school children, the show features a forest full of family fun as Scarlet and her side-kick Stanley the Squirrel try to outwit Walter the Wolf.

Zoe Halliday, from Milton on Campsie, studied at the Royal Conservatoire of Scotland’s musical theatre course. She will play the lead role of Scarlet and Glasgow Theatre Blog caught up with Zoe to find out about the show. 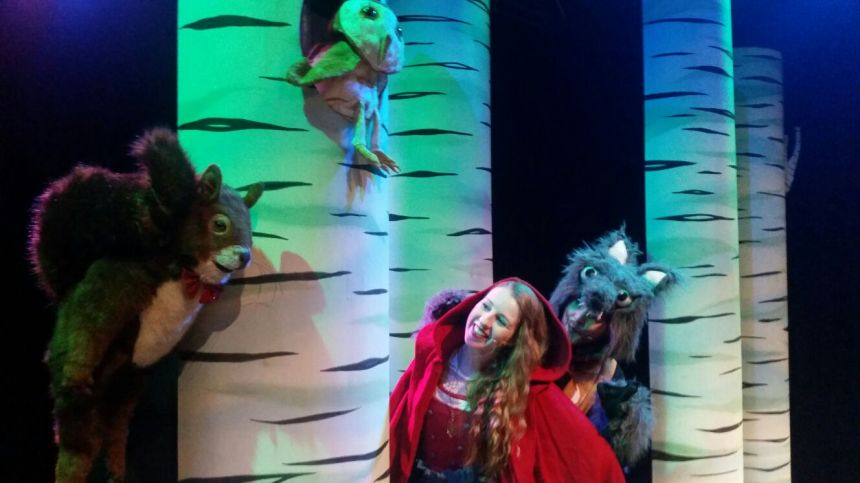 Tell us a little bit about the play.

The play follows the story of 16yr old Scarlet who is lives in the woods with her father. Not having many friends and feeling a bit alone has left Scarlet longing for an adventure which falls into her lap (literally) in the form of letter from her grandfather. After some indecision about her own bravery Scarlet embarks on the quest her grandfather has sent her. Along the way she meets some wonderful forest friends including Stanley the Squirrel but also faces someone hairy not so nice enemies! The story is a whirl wind of adventure with catchy tunes all the way!

I play the fearless “Scarlet”

How has the play been received so far, has it been different in different locations?

The play did a run over Christmas at  Roxy Assembly in Edinburgh. The audiences were fantastic and got right into the spirit of the show by singing along and joining in the madness.

It is exciting! Every day we are in a different theatre/venue and face whatever challenges that presents. Whilst it can be hard going being away from family and friends we have become really close as a cast and always manage to have a laugh! Bringing the show to new audiences every day is really special and even better when you have a strong, fun filled cast.

Touring can be demanding, how do you keep your performance fresh/look after yourself when you’re having to travel as well as perform on stage at night?

I wish I could say I eat lots of vegetables and exercise regularly but that would be a lie. The performance is fresh every day because it’s my job and I love doing it. That and some orange Lucozade and we are laughing.

Can we go back a bit and talk about what inspired you to become an actor and the path you took to become one?

I decided I wanted to become an actor very early on. I loved dancing as a young child  and was inspired by my mum who had her own dance school. I had grown up with old school musicals and dance films.  I think I watched Seven Brides for Seven Brothers so many times the video broke!

When my parents put me in stage school at 10 it just all made sense.

At the age of 13 I was one the first cohort of the Preparatory Musical Theatre programme at the Dance School of Scotland were I studied all through my high school years. I then went onto study a BA in Musical Theatre at the Royal Conservatoire of Scotland at just 17yrs old.

Any advice for aspiring performers?

If you really want it, it is worth waiting for. The performing arts is an extremely hard industry but worth every ounce of effort!

Finally, why should people come along to see the play? and where else can we see it?

You should come and see Little Red Riding Hood for some exciting, fun and catchy enjoyment! Life isn’t as fun without a little adventure!