Posted on April 4, 2015 by glasgowtheatreblog 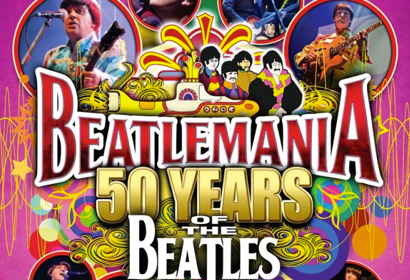 It is over fifty years since The Beatles released their debut album “Please Please Me” and Beatlemania is still very much alive and well and filling theatres and concert halls up and down the country.

Beatlemania is also the name of the well-established tribute act playing to the packed house at Glasgow’s Pavilion Theatre.

A musical love letter to the Fab Four, it follows a format now familiar: an ‘in character’ concert from the sharp-suited early days to the final Apple years. Rip-roaring through the back catalogue of the worlds greatest ever band.

The engaging quartet are without doubt talented musicians, particularly worthy of note is the drumming of Dave Gee as Ringo and the nifty playing by guitarist Rich Jevons as George. The pairing of Paul McDonough and David Peterson as Lennon and McCartney are competent if a little vertically challenged and in McCartney’s case, a little more substantial in girth, but the pair provide a little between-song banter to amuse the crowd. There’s also an attractive light show throughout. Of note the band don’t utilise projection screens to set the scene for each era as most of their contemporaries do.

But it’s the songs the audience is here for. Those age-defying, generation-busting classics – and every one really is a winner. It’s hard to whittle The Beatles vast back catalogue down to a 2 hour set, but the choices here cover the biggest and best, much to the delight of the crowd who sang, clapped and attempted to dance* their way throughout.

It did lack that certain sharp edge to the sound and electrifying immediacy that the very best Beatle acts achieve, though this could be down to the acoustics of the auditorium or the sound mixing on the night, but this is a hugely enjoyable evening and hearing the first chord of these much-loved tunes is enough to make the hairs on the back of your neck stand up. Well worth the ticket price visit if they’re visiting your town. A great night of nostalgia.

*On a side-note and no reflection on the highly talented musicianship onstage, were the antics of the Pavilion crowd. Not unlike an episode of Off Their Rockers or You’ve Been Framed, it was definitely Pensioners Behaving Badly; the frisky Friday night audience of advancing years provided some entertaining highlights of their own.

There were the dance rebels, who, disgusted at the staff’s zero-tolerance policy on boogieing led a rebellion in the aisles and vociferously voiced their dismay to the band at any quiet moment. After most of the boppers had been calmed by the staff, the lone rebel, committed to showing his defiance, managed to cuff a fellow audience member on the back of the head during one particularly I’ll-advised move, only to be rewarded by the injured party with a punch in the face.

Joining them were the strategic bar queue manoeuvrers who had the psychic ability to calculate when the interval was coming and stage a mass walk out to get to the head of the line as the band were still giving their all onstage.

There also appeared to be little awareness from some that the were not actually in their own living rooms and some chatted incessantly throughout. Thankfully the volume level of the band managed to drown out the majority of it.