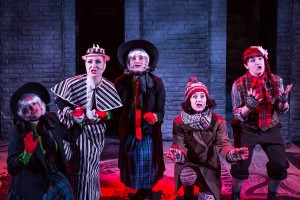 There’s much speculation every year at the Tron Theatre as to whether this year’s production will top the last. The annual panto is never your traditional fare: refreshingly celebrity-free with no lazy pop tunes or reliance on worn out slapstick, instead it delivers ground-breaking originality and innovation year on year.

And the pressure to deliver is great, writer-director Johnny McKnight has big shoes to fill in this Glasgow theatre, following as he does in the footsteps of writers such as: Peter Capaldi, Craig Ferguson and Forbes Masson and in Aganeza Scrooge, boy does he deliver, with non-stop laughs and a finger firmly on the pulse of his audience.

In a storyline that might just sound familiar: Christmas is in full swing, everywhere that is, except Dickensian Street, home to legendary miser and money-lender Aganeza Scrooge, “the scariest skinflint in the pantosphere”. Aganeza is, of course, visited by three legendary ghosts, those of Pantos past, present and future, in order to show her the error of her ways. This all-female take on Charles Dickens’ A Christmas Carol stays loyal to the oft-told tale but with razor sharp wit, perfect pace, a genius eye for local detail and a cast bursting at the seams with talent. It truly is a celebration of Glasgow at its best and for all its cleverness it manages to retain a genuine warmth and charm.

The cast of six show astonishing versatility, seamlessly switching between multiple characters: a Liverpudlian ghost; Wee Jimmy Krankie; Tiny, or rather Whiny Tim; 80s disco diva Frizziwig; a Sally Bowles-like Ghost of Panto Future and Cockney Bobby (S) Cratchitt, to name just a few. McKnight himself stars as the title character and his pitch perfect delivery never falters throughout: firing out line after line of dialogue that will have you laughing out loud and tears rolling from your cheeks from the first scene to the last.

The writing is sublime but credit must also go to the music from composer Ross Brown which ranges from Les Mis-like musical theatre, Disney-esque show stopper to slinky cabaret and to the simple but highly effective set and costume designs of Kenny Miller.

This is executed with such energy and originality that even the most panto-phobic among you won’t fail to be won over. Beg, borrow or steal a ticket if you can.