Bringing vividly to life Dickens’ timeless characters with its ever-popular story of the boy who asked for more, Lionel Bart’s sensational score includes Food Glorious Food, Consider Yourself, You’ve Got to Pick-a-Pocket or Two, I’d Do Anything, Oom Pah Pah, As Long As He Needs Me and many more.

Six months on from The Producers, this is Hamilton Operatic Society’s latest offering. With another enormous cast (50 adults and 50-55 children – yes, you read that correctly!) and a change of venue a few miles north to the cavernous Motherwell Concert Hall – It’s time for Oliver!

The last production by this society was of such high quality  that I was looking forward to this enormously. So did it live up to expectations? Well if I’m being honest – no.

But first to the highlights; Yet again, John Carr was a fine Fagan – both his acting and singing were of excellent quality and he played the role with a engaging warmth and charisma. Gordon Watson, stand-out performer from The Producers, was again in fine voice in the small, but key role of Bill Sykes. Peter Scally as Mr.Sowerberry made an impact in the short time he was on stage and the children playing Oliver and the Artful Dodger did so effectively – Oliver possessing a clear voice (but a bit lifeless) and the Dodger full of life (but constantly hauling up his trousers!)

One highlight of the evening were the ensemble members who sang Who Will Buy, each, to a man (and woman) were fine, fine singers so much so, that I wonder why some of them were passed up for bigger roles. Which brings me to the most jarring note of the performance – yet again. Now I took two guests to see this with me and in the interest of bringing an unbiased opinion here, I asked them what they thought of the performances before I shared what I was going to write. Both were astonished at the casting of Nancy – Now as anyone who has seen, heard or read about this show will know that it is one of the pivotal roles. So why oh why was the dialogue mangling Suzanne Gilliland cast as such a key character again. Not a line of dialogue or lyric was intelligible. The only line that was decipherable was the belting out of –  as long as heeeee neeeeds meeeeee! at the end of said song. I wasn’t exactly a fan of hers from the last show but was willing to cut her some slack if she proved me wrong here. Well she only confirmed that she was woefully miscast yet again. Both my guests agreed as did some colleagues who expressed their dismay at her performance.

Once again the scenic team provided some unexpected moments of slapstick in their scenery- removing. My special favourite was the gent, who, in the middle of Fagin’s big dramatic number Reviewing The Situation decided to dismantle the fireplace directly behind Fagin’s head in full view of the audience. I wondered if he was a disgruntled reject from the casting process who was getting his moment in the spotlight – quite literally – RIGHT in the spotlight  – pure comedy gold. Another slightly alarming addition were the crinoline-clad ladies who wafted down the aisles, waving their hands in the air then promptly wafted off again out of sight. I personally think it was just an excuse to wear a big pastel coloured satin frock!

Now back to the performance – credit must go to the children of the ensemble – they were absolutely charming, step-perfect, and of fine voice throughout. They kept up levels of energy and professionalism that the adults would have been proud of.

This production had many plus points – John Carr and Gordon Watson especially and some very good supporting performances, but ultimately there was something missing – it didn’t have the heart or the warmth that would have made it great. I keep my fingers crossed for their next production Fiddler on the Roof in November.

Until the production photos are posted here are some rehearsal shots from STV online. 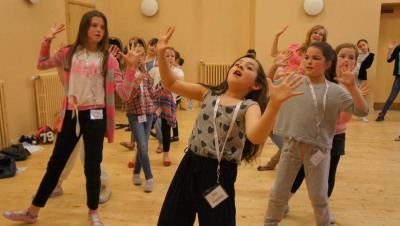 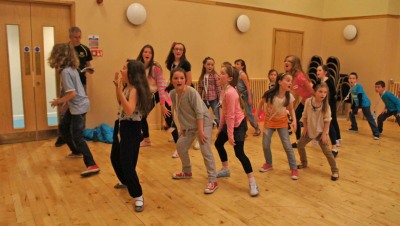