Many, including me have had doubts about the wisdom of turning the 1955 Ealing comedy The Ladykillers into   a stage show. The story of a “professor” of crime who masterminds a   daring robbery and uses the subsiding house of a sweet little old lady in   King’s Cross as the hideout for his villainous gang, all of them impersonating (badly) the members of a classical string quintet, isn’t just one of best Ealing   comedies, it is one of the most loved British films of all time. 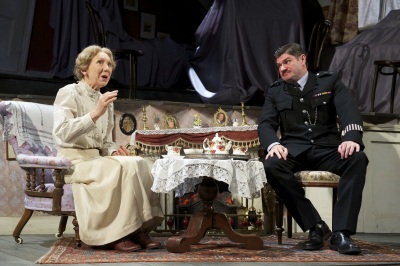 But, amazingly, the show works and oh boy does it work, so much so that the tears of laughter running down my face were so bad that I had to reach for a hankie to mop them away. This is truly laugh out loud funny – and that’s rare thing to say. Just the sight of the crooked house   of innocent Mrs Wilberforce raised a round of applause from the audience. The set has been brilliantly designed by Michael Taylor and springs some   fantastic surprises in the course of the show. 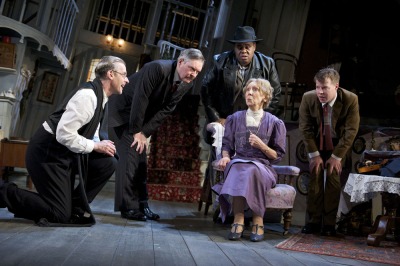 This isn’t an exact re-telling of the film – that really couldn’t be done, instead, Graham Linehan’s new adaptation and Sean Foley’s inventive production is full of fantastic jokes and amazing physical comedy, but most amazingly of all, it still remains true to the charming spirit of the brilliant original. 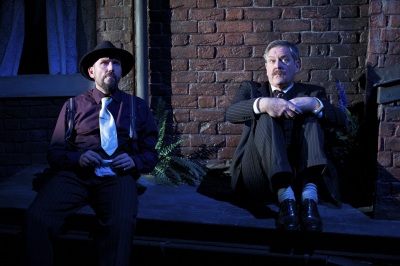 The cast are truly stellar; Peter Capaldi, Ben Miller, James Fleet and Stephen Wight not only play their individual roles to perfection but also combine beautifully as a whole.This is a rare treat – just a perfection from start to finish.

It has also just been announced that it will tour the UK at the end of the year. I urge you to get tickets. This truly is a must-see.