Posted on May 12, 2012 by glasgowtheatreblog

This stage adaptation of Singin’ in the Rain, the classic 1952 movie musical  starring Gene Kelly and Debbie Reynolds, about a silent movie company struggling  with the rise of talkies, first caused a buzz at the Chichester Festival  Theatre last summer. The musical score, including the famous title song, is  written by Nacio Herb Brown and Arthur Freed. Choreography is by Andrew  Wright.

Any stage version could never eclipse the technicolour wonder of the original film, but this new production is crowd-pleasing stuff. Standing ovation inducing stuff in fact!

Renowned ballet dancer Adam Cooper plays the hero of the piece, Don Lockwood. I have always adored Cooper’s dancing and Andrew Wright’s inventive choreography brings out the best in Cooper’s sinuous frame, he is pure poetry in motion.

The rest of the cast are superb too, Katherine  Kingsley (above) has an appealing comic touch as the ill-fated silent film actress Lina Lamont, Don’s on-screen  romantic partner, whose career falters when microphones expose her ear-bleeding vocals. 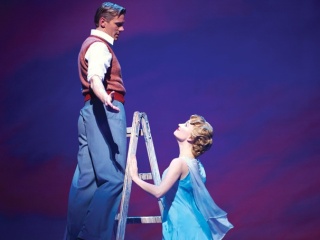 Scarlett Strallen (above with Cooper and below centre) plays Don’s love interest, the aspiring starlet  Kathy Selden with a warmth and charm and 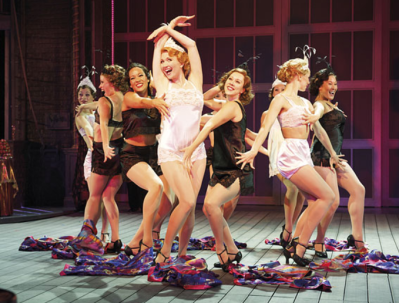 The Broadway Melody  number (below) is another highlight of the night, showing off not only Cooper’s virtuoso dancing skills, but the rest of the cast’s as well.

The staging is a dream and the show provides three hours of the most perfect Prozac pick-me-up escapism you could want. What I loved most was the fact that the whole thing looked absolutely effortless, there wasn’t a bead of sweat on any brow, despite being end to end high octane energy.

And the sheer delight on the faces of the cast as they soak the front rows in the encore is a hoot (below).

This is sheer class – a real triumph and the closest you will come to re-capturing that golden-era of Hollywood musicals today. A real triumph – go see it!