Posted on May 12, 2012 by glasgowtheatreblog

I watched this last night after a fortuitous sale purchase. Now it’s easy to criticise everything Andrew Lloyd Webber produces. So with an open mind, I sat down to enjoy this.

And did I? Absolutely! In the confines of The Royal Albert Hall which by no stretch of the imagination can be called a theatre – this was magnificent. 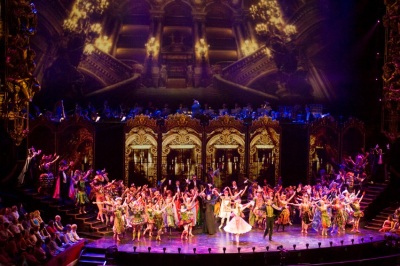 It stars Ramin Karimloo and Sierra Boggess as The Phantom and Christine, both veterans of the original Phantom and the recent follow up Love Never Dies.

Now, Karimloo has his detractors among theatre critics but he is also regarded by many as the golden boy of musical theatre. Here, he is impressive. His voice soars and he is, in turn, sinister, menacing and heartbreakingly vulnerable.

The supporting cast is made up of Phantom veterans and members of the current Her Majesty’s production. It has a cast and orchestra of over 200 in contrast to the usual 40. On the whole they equip themselves very well, however the inclusion of Wynne “Go Compare” Evans was a bit of a jarring note.

Outside of his Gino Compario costume I’m not sure anyone in the audience actually knew who he was, and when he was called to fluff some notes for comedic effect the audience didn’t quite get the joke and remained silent.

Hadley Fraser plays Raoul and has an incredible voice, with great strength and power and phenomenal tone, he was absolutely excellent in the role, playing it with a maturity that is often lacking in other castings. Instead of the spoilt little rich boy whom you wonder why Christine would ever consider, he gives The Phantom a run for his money and you really believe Christine’s dilemma.

As with many recent productions this features a lot of projected scenery, now I’m not thoroughly convinced of its effectiveness as it can sometimes lack atmosphere but here, combined with props – it works.

If you get a chance to see this go for it, it really is worth it. If you’re a fan of The Phantom already you’ll love it!