He really is a whizz of a wiz, if ever a whiz there was! So we went off to see the wizard – the wonderful Wizard Of Oz – Saw this on my birthday trip to London.

It has been almost a year since Andrew Lloyd Webber launched his TV search to find a Dorothy to star in his latest West End show. 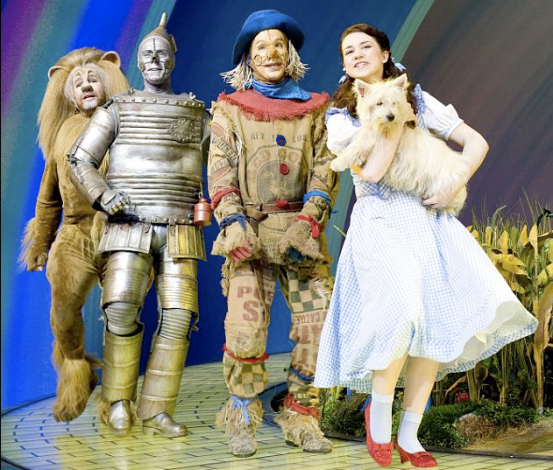 Danielle Hope won the BBC talent hunt Over The Rainbow beating 9000 hopefuls and the 18 year old is now fulfilling her dream – with advance ticket sales already passing £10 million. Her performance is natural and easy and Kansas accent remained strong throughout and her rendition of Over The Rainbow was well delivered.

It was truly a spectacle. Jeremy Sams’s production pulls out all the stops, with ingenious designs by Robert Jones that skilfully conjure up both the sepia world of Kansas’s furrowed fields, to the lurid colours and green Art Deco Palace of Oz. The Yellow Brick Road itself is on a tilted revolve from inside which poppyfields and labyrinthine forest emerge. The costumes as well are fantastic. 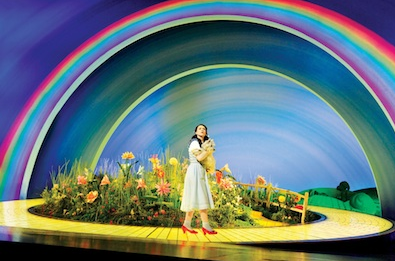 Witches sparkled and cackled, dropping in from the dizzyingly high ceiling and rising from the floor.

The incredible collapse of Dorothy’s home in the tornado is almost cinematic, as computer graphics make the winds whirl as the house spins into the vortex of space.  Better yet the Munchkins are genuinely sweet rather than the grotesque freak-show offered by the MGM movie, and Toto – the cutest white Westie (played by Dazzle, Razzamatazz, Bobby and Topper see below) – is adorable. 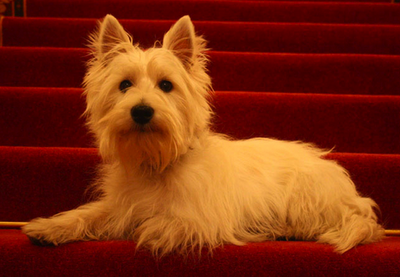 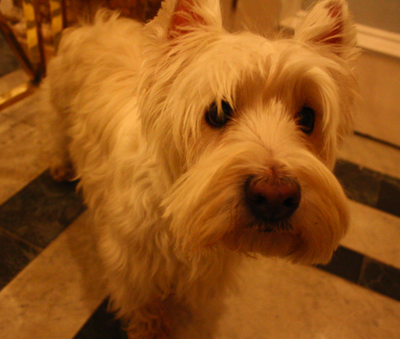 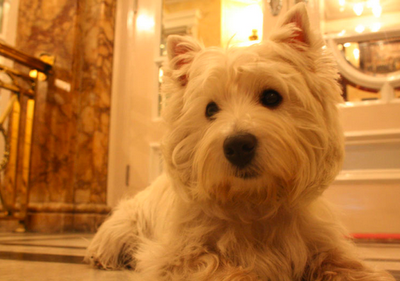 It’s good to be reminded of such classics as Over The Rainbow, We’re Off To See The Wizard, and Follow The Yellow Brick Road. The additions by Lloyd Webber and Rice are also perfectly good. Dorothy is given an opening number, and Red Shoes Blues, sung by the Wicked Witch (Hannah Waddingham), is a welcome addition. 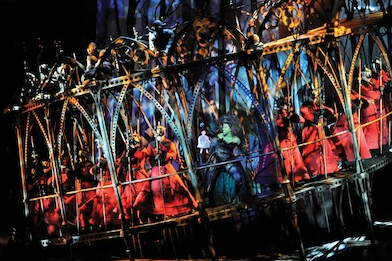 The Wicked Witch’s revolving lair provides a scare for the teeny tinies in the audience (see above), and there are plenty of flames, bangs and crashes, but as with the film and in the other Oz musical Wicked, everyone will be terrified by the grotesque flying monkeys, although the sheer number of them in Wicked was even more frightening. The supporting cast were superb especially Edward Baker- Duly as The Tin Man and Paul Keating as The Scarecrow.

Some of the smallest details are the most treasurable: the chorus of puppet crows in the cornfield; the flying silhouette of Miss Gulch on her bicycle and overwhelming brass engine room at Oz. There is great pleasure in being in a theatre with a show where an audience is greeting a very old friend and celebrating a very great movie.  This truly is a visual feast and a sheer delight and a welcome companion to its pre-set partner across town – Wicked.