“A completely original play by Agatha Christie, Verdict, eschews the mystery thriller format and is more of a melodrama. Yes there’s a murder but it is carried out onstage in front of us and Christie is much more interested in exploring the consequences of following the head and not the heart and the impact that purely intellectual reasoning can have on people.”

“Set in 1958 in the Bloomsbury flat of German émigré Professor Karl Hendryk where he lives with wife Anya, suffering from a progressively debilitating disease, and cousin Lisa who helps to care for her. Anya is bitter about having to flee her contented life in Germany due to Karl’s act of kindness to a persecuted friend and depressed about the state of her own health, so questions of suicide are raised when she dies. But his liberal attitudes to those who do him wrong push his friends to the very limit as it turns out all is not what it seems with his wife’s death and adhering so strictly to his moral code threatens those who are closest to him.”

This was booked at an hour’s notice and I’m glad I did. An interesting departure from the usual Agatha Christie whodunnit, this was gripping, atmospheric and the acting was beautifully pitched, something often lacking in productions like this. An unexpected gem on a rainy afternoon. 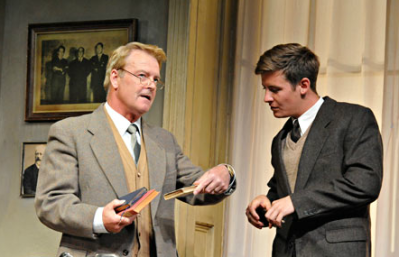