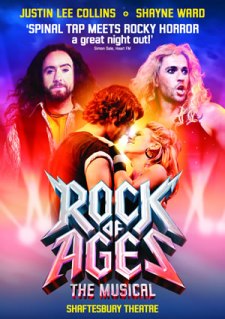 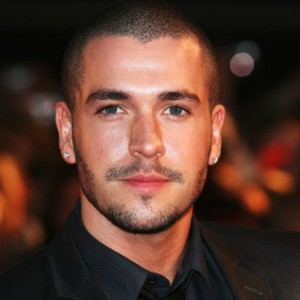 As you can see it’s really high brow and understated! It also stars Natalie Andreou, Simon Lipkin and Oliver Tompsett in his first role since leaving Wicked 2 years ago.

Well subtle it ain’t, but entertaining it is. It makes up in energy and enthusiasm for what it lacks in storyline or subtlety. You would be hard pressed not to leave with a huge smile on your face, especially after waving your (complimentary) “lighter” in the air during the power ballads and having drinks served to you at your seat during the show. You can see where the producers are going with this – who cares about the story if your a bit inebriated and singing along to the biggest hits of the 80s – what’s not to love???? There’s actually a lot to love. 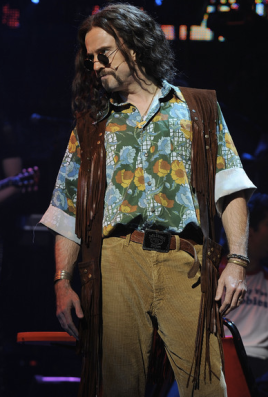 Justin Lee Collins role is hardly a stretch but he equips himself with aplomb and he can sing well enough for the character. His comic timing is great and he gauges the audience well, interacting with knowing winks and glances. 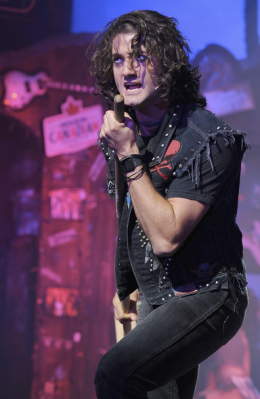 Oliver Tompsett is a revelation – usually playing the classic West End leading man, he has a beautiful voice for traditional musical theatre but here – well WOW! Boy can he sing. His “rock” voice is stupendous, holding and controlling some amazing notes – just brilliant. He plays the nice guy who wants to be a bad boy rocker just perfectly and his winning charm has you on his side from the start. 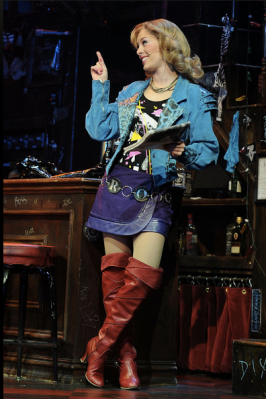 Simon Lipkin (above as Lonny) had to suffer from wearing a sleazy looking mullet all evening but overcame this handicap by being the funniest thing on the stage. He had the audience firmly in the palm of his hand from the get-go. (He also has a natty line in tasteless t-shirts for you to watch out for.) The guy is comedy gold dust.

I can hear the stampede from the bus loads of hen and stag parties right now!! It’s just great fun – if you’re up for a feel-good night and want to leave with a huge smile on your face (as well as the debris from the glitter bombs and streamer cannons) go and enjoy.