In the springtime of last year I decided to go see this, less for the play itself and more for the opportunity to see three of Britain’s rising acting talents together on stage. Harry Lloyd, Gemma Arterton and Rupert Friend were brilliantly cast in this funny play.

From Michael Billington in the Guardian – ‘Diane, a top Hollywood agent, wants to make a movie of a hit New York play about male lovers. She’s also desperate for her client, the discreetly gay Mitchell, to star in it. To accomplish her aims, this power-dressed female Machiavelli has to pull off two tricks: coerce the writer into turning his play into a hetero romance; and keep the sexual preferences of her client, who has fallen for a bisexual rent boy, under wraps. How Diane manages to cash in, while preventing her client coming out, motors the plot. We are also reminded that, even after Brokeback Mountain and Philadelphia, Hollywood thrives on sexual and professional secrecy.

In a telling line Diane reveals: “if you want to win in Hollywood, all you have to do is shut up.” 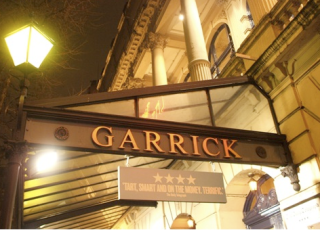